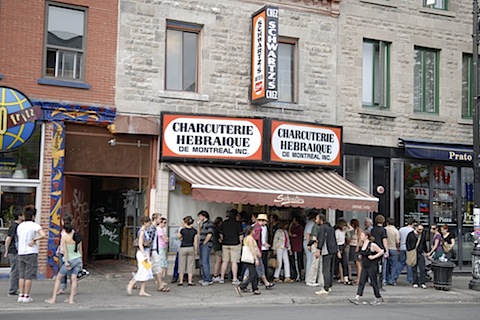 The documentary film, Chez Schwartz, enjoyed a quiet if savory U.S. premier at the Berkeley Richmond Jewish Community Center earlier this week. It has yet to be picked up for wider distribution, but keep an eye out for it. Or, if you can’t wait, order a DVD and see for yourself why this little “Charcuterie Hebraique” is the place to eat in Montréal.

Garry Beitel, a Montréal-based documentary filmmaker, recorded the day-to-day rhythms of Schwartz’s Deli over the course of an entire year. He managed to whittle his footage down to a poetic study of its workers. As one season melts into another, Beitel teases out the stories of the diverse men — from the dishwasher in the back of the house to the waiters in the front, from the general manager down to the gentlemanly panhandlers. They each describe their unique role in the extended family anchored by this tiny, 75-year-old restaurant. Through their stories, we see how years slip into decades and how one long-lived business adapts to a changing world.

Unusual in a film about ethnic food, there’s an “overcast” feel throughout the documentary. In the end we wonder what happens to individuals such as newly promoted Alex or sweet, ailing Ryan. (Anyone interested in degrees of separation and ground-breaking animation should watch this award-winning short about Ryan.) The power of Chez Schwartz lies in Beitel’s understated directing, Marc Gadoury’s intimate camera, André Boisvert’s amazingly natural sound, Robert Marcel Lepage’s music and — ultimately — the simple, direct oral history of the workers themselves. 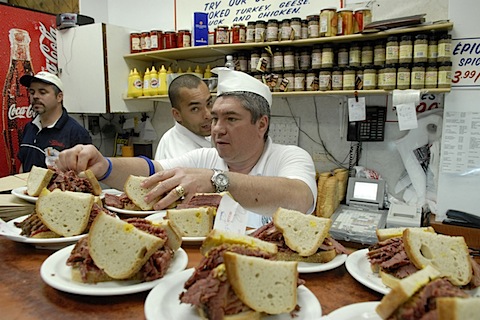 At the head of the line, hungry pilgrims can catch glimpses of smoked meat, freshly sliced by hand and ready to go at the sandwich counter. Joao (Johnny) GonÃ§alves, meat cutter, prepares some without the usual bright yellow mustard.

I remember the first time I bit into smoked meat at Schwartz’s. Everyone does. In the film, we witness the rapture of two women who share their first sandwich right there at the counter, and we listen to a man struck speechless while remembering his own first taste as a teenager. It may seem strange, perhaps even laughable to the uninitiated. But like any religion, only the converted truly understand.

During my year of exile in Vermont, I drove across the border every month to eat in Montréal. While dinner restaurants varied — rilettes at l’Express with my own jar of cornichons or maybe noodles in Chinatown — I always started with an early lunch at Schwartz’s.

The neighborhood surrounding the deli draws immigrants from around the world. Historically the heart of Montréal’s Jewish community, the road on which the deli sits has also been the symbolic division between the city’s east and west streets, its French and English languages. 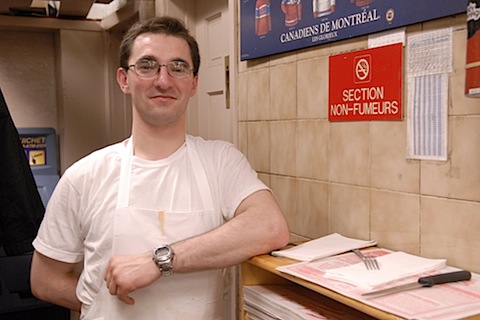 After five years as the busboy, Alexandre “007” Lebel gets promoted to waiter. To help with the stress of a fast-paced deli, he composes poems on clean paper place mats during precious down time.

If you arrive at 3895 Boulevard St. Laurent anywhere near the middle of the day, you’ll stand in line on the sidewalk with a couple of dozen other meat lovers, separated by mere glass from stacks and stacks of brisket still warm from the massive steamer. You’ll be able to smell the smoky, salt-tinged meat and listen to the same order over and over again in two different languages: a “medium” with fries, cole slaw, fresh pickle and black cherry soda. Around 400 to 500 other diners a day will order a steak from Peter at the grill; it arrives accompanied by a slice of calf liver and two diminutive sausages. The grill is a relic of the past: open flame right in the dining room, arm’s length from innocent diners. 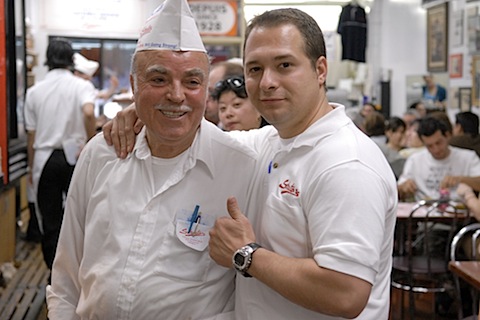 Grill man Peter Christianis (left) has been searing steaks and calf livers at the same station for 40 years, while waiter Mike Nelli has been a member of the Chez Schwartz family going on 7 years now.

Upstairs in the marinating bins and in the smoker in the back are where the magic happens. The very secret recipe results in Ã¼ber-meat that’s juicy and tender, savory and smoky, fatty and flavorful. It’s not quite pastrami (there’s a dry rather than wet cure) and it’s way beyond corned beef (behold that spice-flocked, smoke-lacquered exterior). So everyone just calls it for what it is: smoked meat. 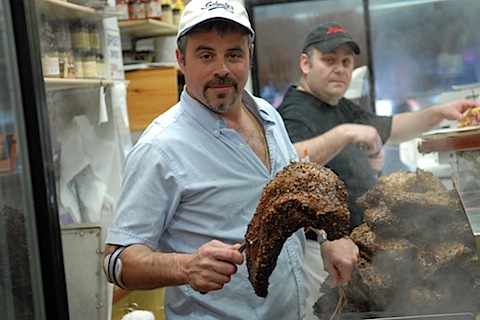 Frank Silva, general manager, knows the business inside and out. He’s hefted and sliced so many briskets during his twenty years at the deli that his arm is starting to give out.

Schwartz’s sandwiches have no need to rise to Carnegie heights nor does the owner, Hy Diamond, feel pressure to expand the menu beyond one type of meat sandwich, a steak and a few sides. As Peter Levitt and Karen Adelman, co-owners of Saul’s Deli in Berkeley know well, this is a rare and precious thing.

After the film’s screening on Thursday night, the two moderated an enlightening discussion about the future of Jewish delicatessens in the U.S. How does a meat-centered restaurant survive in a health-conscious, politically aware, option-filled world? How does Saul’s modest amount of Niman Ranch beef compete with super-stacked, industrially raised pastrami from tourist-driven, New York delis? And how does a younger generation begin transforming a cuisine frozen in time into a meaningful, relevant, profitable business? 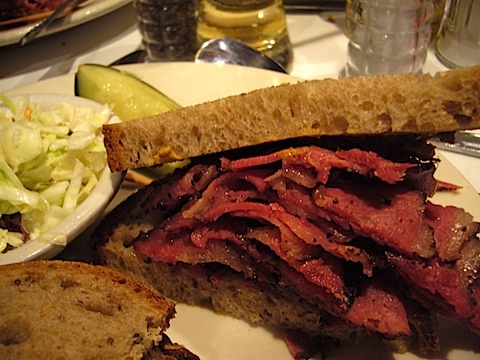 It’s not about the size: Saul’s uses “clean meat” from Niman Ranch in its pastrami sandwiches.

Anyone who hangs around chefs knows that, generally, they survive on the razor’s edge of profit margins and see the cloud behind every silver lining. Peter and Karen were refreshingly honest about the challenges of running the deli, from the need to cater to the economics of not smoking your own meat to the impossibility of guaranteeing a kosher establishment. (People want milk with their coffee, after all, and don’t even think about getting rid of the Reuben!)

They named their own favorite delis: Langer’s in LA, Katz’s in NYC, and Manny’s in Chicago all made the short list. Most intriguing, though, were hints of a possible “Jewish bistro” in their future. The two hope to reinterpret and reinvent the vernacular of Jewish food with dishes from around the world using local, seasonal, organic ingredients.

For the time being, I’m going to continue enjoying my favorites at Saul’s. From personal experience, I can vouch for the chopped liver (on both rye and matzo with plenty of mustard), the chicken soup and the pastrami sandwich. I also enjoyed more than my fair share of half-sour pickles and, of course, a bottle of Cel-Ray to wash everything down.