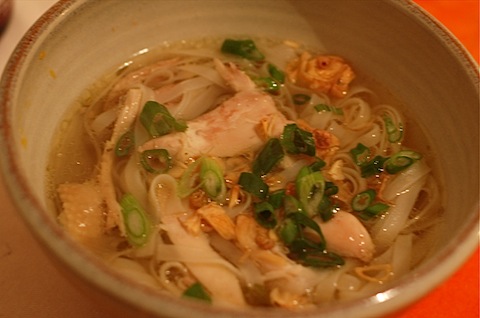 Lucky me, the flu came visiting last week. Even after three days of sleeping in bed and swallowing nothing more than bananas and Advil, I could tell my uninvited guest had no intention of leaving. Time to get serious.

Cooking was out of the question — I could barely stand up straight with the long, invisible spikes piercing both sides of my brain — so I smiled as sweetly as possible at my husband and said three words: Pho ga. Please.

He’d never made the soup before nor did he have a mother who cooked it once a week, so I scribbled down some notes on a scrap of paper. I fell back asleep before he left for the grocery store, and by the time I woke up again, blessed me, I could smell the lovely scent of star anise and cinnamon and ginger all the way into the bedroom.

Now, lest you think that I’m married to a kitchen wizard, let me just say that during the five years he lived alone, the only meat he ever bought was bacon and he never, ever, not once, turned on his oven. Fortunately, the best foods for the soul are always the simplest.

Pho ga is an excellent way to prepare meals ahead of time. My mom used to simmer the chicken on Sunday, boil a big batch of noodles, wash all the herbs, and then refrigerate the components separately. It only takes about 10 minutes to reheat the stock and noodles for a comforting bowl of soup anytime during the week.

Eating my way through my husband’s very first pot of pho ga brought me back to the land of the living. Here, verbatim, is the recipe:

Preparation
1. Cut chicken in half & pull off fatty chunks @ tail 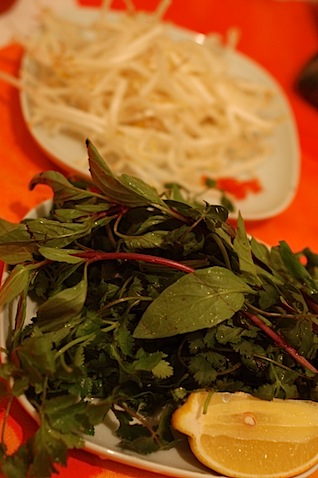 This is the dream list for a homemade bowl of pho ga. Decent shortcuts include using good-quality, prepared stock and the meat of a rotisserie chicken. If you keep a box of premixed spice packets in your pantry (they look like big teabags), you can infuse plain chicken stock with Vietnamese flavors in 20 minutes. I’ve been known to enjoy a bowl of pho with only scallions for garnish, but each additional herb really does make a huge difference.

When buying rice noodles for this soup, look for the words banh pho ga on the label. If you’re lucky enough to find fresh ones, you’ll just need to immerse them for 10 or 15 seconds in very hot water. Dried noodles require 2 to 3 minutes of boiling.

I have a wide, extremely sharp cleaver that eases right through chicken bones. Halving chickens is also super simple if you have good kitchen shears. If you don’t have a pair…get some. One of the must useful tools ever. Look for the heavy-duty ones with a round indentation at the base of the blades; that’s what allows you to snip through the ribs and along the backbone. For those who think this all too much, just go ahead and buy chicken parts (bone-in!), but be sure to simmer the meat for only 30 or 40 minutes before stripping it off the bones. Having exposed bone marrow extracts more flavor. Besides, anyone who’s tried to remove a whole chicken from a pot of simmering water can vouch for the wisdom of chicken halves or parts.

If you can, throw in a few extra chicken wings or, best of all, a couple of feet.

My family never bothered to strain the soup. All the aromatics and bones sink to the bottom of the pot, and we’d just ladle the soup from the top. If you prefer, though, you can strain the stock and reheat.

Vinegared onions are a favorite topping that’s rarely available in restaurants. To make your own:
1. Slice an onion very thinly.
2. Drizzle generously with white vinegar.
3. Stir in lots of coarsely ground black pepper.
4. Let stand for 10 minutes and then serve alongside the herb platter.

Arrange sprigs of the fresh herbs, lime wedges, bean sprouts and chiles on large platters for finishing the soup at the table. Set a big bottle of fish sauce right on the table, too, because this is a Vietnamese meal, after all.

I like to pour boiling water (from cooking the noodles) over the bean sprouts to blanch them so they aren’t hard and cold in the soup. (Shhhh, don’t tell my Saigon-born mom. That’s a Northern trick that I adopted after leaving home.)

For each diner, place a small nest of noodles in a large, preheated bowl. Cover with very hot stock and add a handful of shredded chicken. Sprinkle with chopped scallions, chopped cilantro and fried shallots. Let guests fine-tune their bowls with herbs and other flavorings as desired. 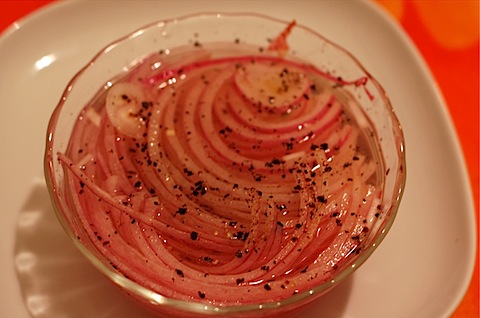