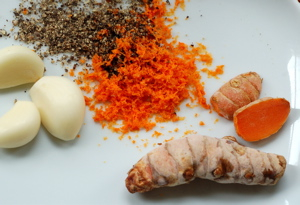 Learning the true shape of our food sometimes comes as a surprise. The challenge of carrying ingredients across time and distance plus the reality of everyday cooking has transformed the look, feel and â€“ most importantly â€“ taste of many foods.

That dry, yellow powder known here as turmeric is certainly one of them.

Looking at a little bottle of it in the supermarket, it’s hard to believe that this cousin of ginger boasts the same family’s gracefully arched leaves and large, stunning blossoms. There are many varieties grown in India, from where nearly all the world’s supply comes. Turmeric’s fragrant bite and intensely golden hue make it a key ingredient in the cuisine and culture of Asia’s southern and southeastern regions. It’s applied as an effective antibacterial tonic in Ayurvedic medicine, simmered in peppery Burmese soups and infused into golden cones of nasi kuning at Indonesian weddings.

Many foods more familiar to Westerners, say ballpark mustard and certain cheeses, also gain their yellow hue from turmeric. It’s often dismissed, unfairly, as a lesser substitute for saffron by those who haven’t tried it in its whole, fresh form or who aren’t familiar with its native, rather than derivative, uses. The Royal Botanical Kew Gardens maintains an excellent website where you can learn more about the ancient history, botany, medicinal uses and spiritual traditions of turmeric.

Look for the slim, orange rhizomes of fresh turmeric in the produce section of Asian and Indian markets, in small bags near where the herbs are sold. Buy rhizomes with bright, smooth peels, avoiding any with soft spots, dark bruises or dried out tips. They freeze well and grate easily while still frozen. Just immerse what you need in some warm water for a few minutes, than proceed to peel and grate.

For each teaspoon of dry turmeric in a recipe, substitute about 1 inch of fresh turmeric. Peel the thin outer layer by gently scraping with the edge of a spoon’s bowl, and then grate the rhizome finely with a microplane or a ginger grater. It’s best to bring out the color and flavor of the fresh rhizome with a quick stir in some hot oil.

Some simple ways to enjoy turmeric: