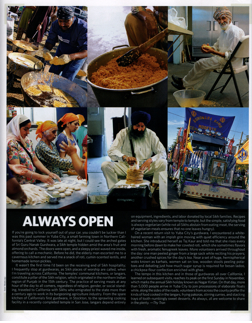 I have a short piece in the current issue of Saveur Magazine (November 2007) about the Sikh tradition of langar, or communal kitchens, and about the annual Sikh parade in Yuba City, CA.

Actually, there are a few corrections to the edited text, too. For the record:

I hope that the article inspires you to visit a gurdwara in your own town and to learn more about the fascinating history and generous traditions of the Sikh.