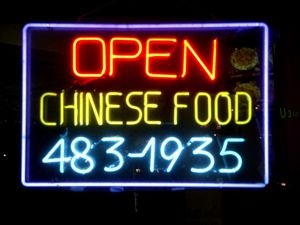 The San Francisco Professional Food Society, the Asia Society and the Chinese Culture Center have all joined forces to tackle a question that lingers, like a greasy smog, over Chinese restaurants:

Why is Chinese food so bad in the US?

Four experts will discuss the topic this coming week in an event geared toward saavy travelers, frustrated diners and nostalgic expats alike. Nicole Mones, author of the novels Lost in Translation as well as the more recent and relevant The Last Chinese Chef, will join Martin Yan, that infamous TV chef, who is now atoning for his can-cook approach by establishing an eponymous Culinary Arts Center in the Middle Kingdom itself. He hopes to teach American chefs how to cook real Chinese food. Rounding out the panel are Albert Cheng, former president of the Chinese Culture Center, and Alexander Ong, chef at Betelnut Restaurant. Olivia Wu will moderate what promises to be a lively discussion.

New York diners have already considered the question more deeply than we easy-going West Coasters. Nina and Tim Zagat’s opinion piece in the New York Times listed access to ingredients and immigration policies as key factors. Mones herself compared Eastern and Western culinary preferences, recipes included, in her attempt to soften the question of why Chinese food in America is still in such a sorry state. Continuing the debate, the New York Daily News suggested that a thriving economy and well-heeled diners in China means chefs can enjoy a better living by staying in their homeland rather than sweating it out. How many creative chefs want to leave their families to sling kung pao and mu shu and yet another order of potstickers when their compatriots appreciate innovative flavors and, more importantly, are willing to pay for them?

If you can’t make the event but would like to taste a bit of the controversy for yourself, visit the SFPFS event announcement: they list several restaurants in San Francisco Chinatown recommended by the speakers.