This week I scored big. In addition to finishing off a pint of burnt caramel ice cream, I found a dusty but still strongly bound first edition of Laughter on the Hill, a book about a young woman who moved to San Francisco alone in the winter of 1940. 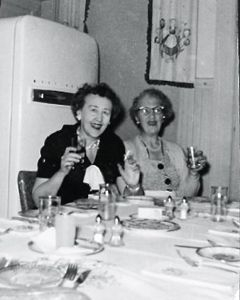 For others who have adopted this city as their home, who have looked over the Bay and its bridges with awe, lived in a drafty dump of a flat that’s very well stocked with wine, or danced in the streets with strangers, this memoir will also strike a chord. It reminded me of other books that capture a special, specific time in the City’s history.

For a taste of San Francisco in years past… 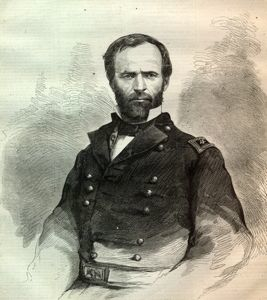 During the spring of 1848, as reports of gold began transforming the City, young William Tecumseh Sherman was still stationed under General Kearny in California. Later in his life, he remembered accompanying Governor Mason from San Francisco to Santa Cruz on one particularly difficult journey.

The house was of adobe, with a long range of adobe-huts occupied by semi-civilized Indians, who at that time did all the labor of a ranch, the herding and marking of cattle, breaking of horses, and cultivating the little patches of wheat and vegetables which constituted all the farming of that day. Every thing about the house looked deserted, and, seeing a small Indian boy leaning up against a post, I approached him and asked in Spanish, â€œWhere is the master?â€ â€œGone to the Presidioâ€ (Monterey). â€œIs anybody in the house?â€ â€œNo.â€ â€œIs it locked up?â€ â€œYes.â€ â€œIs no one about who can get in?â€ â€œNo.â€ â€œDo you have any meat?â€ â€œNo.â€ â€œAny flour or grain?â€ â€œNo.â€ â€œAny chickens?â€ â€œNo.â€ â€œAny eggs?â€ â€œNo.â€ â€œWhat do you live on?â€ â€œNadaâ€ (nothing). The utter indifference of this boy and the tone of his â€œNadaâ€ attracted the attention of Colonel Mason, who had been listening to our conversation, and who knew enough of Spanish to catch the meaning, and he exclaimed with some feeling, â€œSo we get nada for breakfast.â€ I felt mortified, for I had held out the prospect of a splendid breakfast of meat and tortillas with rice, chicken, eggs, etc., at the ranch of my friend Jose Antonio, as a justification for taking the Governor, a man of sixty years of age, more than twenty miles at a full canter for his breakfast. But there was no help for it, and we accordingly went a short distance to a pond, where we unpacked our mules and made a slim breakfast on scraps of hard bread and a bone of pork that remained in our alforjas. 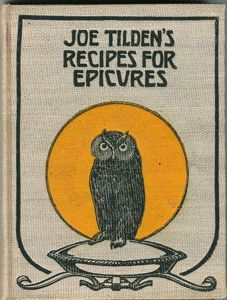 Back when celery was a rare and refined delicacy, displaying its long green stalks in a crystal celery vase was a mark of high society. The tenderest, palest stalks would appear in a creamy soup. This version comes from the kitchen of San Francisco’s self-proclaimed Bohemian and epicurean, Joe Tilden.

Celery Soup
Boil one small cupful of rice in three pints of milk, or two pints of milk and one of cream, until it is tender. Then rub it through a sieve and add one quart of veal stock, salt, cayenne, and three heads of celery (the white stalks only) which have been previously grated. Boil until the celery is tender. 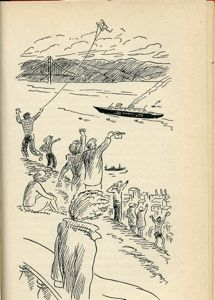 from Laughter on the Hill

Laughter on the Hill, A San Francisco Interlude
by Margaret Parton (McGraw-Hill, 1945)

This slim volume recounts the quintessential San Francisco experience: the ripeness of youth, rebellion amidst soul-searching, parties with poets and much, much red wine. Before she became a reporter and correspondent for the New York Herald Tribune, Parton lived for a year in a tiny, walk-up on Telegraph Hill.

It was autumn now in San Francisco, and wine-making time on the Hill. As I walked down Union Street toward the streetcar I could smell the purple grapes hanging rich and heavy in the hidden arbors behind the bare white fronts of the Italian flats. Great wooden barrels, scoured for the wine to come, began to appear in front of every doorstep, and one day there was the stained old wine press starting its yearly journey from the houses at the top of the Hill down to the late harvesters at the bottom. Each day as I passed it would be moved a little farther down, its heady smell mingling with the warm air from the basement bakeries, the odors of Provolone, salami, and black olives from the dim Italian groceries, the acid reek of the dark, male-frequented alleythe salt wind from the Pacific. 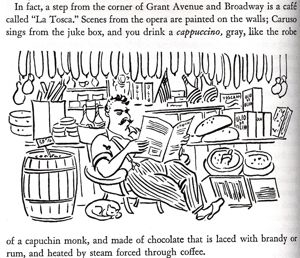 from This is San Francisco

This Is San Francisco: A Classic Portrait of the City
by Robert O’Brien (Whittlesey House, 1948)

For catching the City in its many moods, there’s no better than Robert O’Brien’s street-by-street study. He trained his eyes and ears onto the quirky characters who flocked to the â€œCity of Second Chances,â€ and his book, recently reprinted, remains one of the best portraits we have of the City.

Cross Broadway, and you leave behind the kingdom of chow mein and jow won ton and jasmine tea, and enter the realm of ravioli. The vowels you hear now are soft and liquid, and the music is something from La Tosca.

In fact, a step from the corner of Grant Avenue and Broadway is a cafe called â€œLa Tosca.â€ Scenes from the opera are painted on the walls; Caruso sings from the juke box, and you drink a cappuccino, gray, like the robe of a capuchin monk, and made of chocolate that is laced with brandy or rum, and heated by steam forced through coffee.

This is a world of round brovolette cheeses hanging in store windows, and garlic sausage, and capretti at Easter time. Of the lovely smells of baking bread coming from ovens beneath the sidewalk, of picturesque and brightly colored family washings on clotheslines strung high over narrow alleys, of flowers in window boxes and canaries singing. Of Tony’s Shaving Parlor, and the Panama Canal Tagliarini and Noodle Factory and the Roma Macaroni Factory. Of steep lanes on the side of Telegraph Hill, and fat Italian housewives leaning on the their window sills and laughing in the sunshine, and wiry Italian boys playing ball in the street. 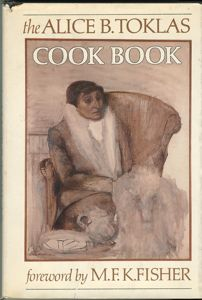 After settling comfortably for years in France, Gertrude Stein and Alice B. Toklas returned to the U.S. for a lecture tour that stretched from New York to California. They weren’t impressed with what they ate during much of their journey across the nation but were delighted at last to reach the West Coast. (I’ve been searching for the tarte Chambord recipe for years, so if anyone knows how to make it, drop me a line!)

In San Francisco, we indulged in gastronomic orgies–sand dabs meuniere, rainbow trout in aspic, grilled soft-shell crabs, paupieres of roast fillets of pork, eggs Rossini and tarte Chambord. The tarte Chambord had been a specialty of one of the three great French bakers before the San Francisco fire. To my surprise in Paris no one had ever heard of it.

At Fisherman’s Wharf we waited for two enormous crabs to be cooked in a cauldron on the side-walk, and they were still quite warm when we ate them at lunch in Napa Country. Gertrude Atherton took us to lunch at a restaurant were the menu consisted entirely of the most perfectly cooked shell-fish, to her club where the cooking was incredibly good, and to dinner at a club of writers where conversation excelled. 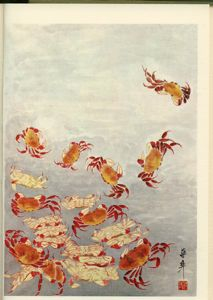 from The Silent Traveler in San Francisco

This is one in a long series of books written and illustrated by Yee as he explored cities throughout Europe and the U.S.

The crab-sellers of San Francisco’s Fishermen’s Wharf offer a sharp contrast to my mind from the lobster-seller in Bar Harbor and all the coastal towns of the State of Maine. There every lobster is kept alive as long as possible and there is no sign of any being cooked on the spot. It is the general belief that a lobster should be eaten straight after being cooked, for it tastes best then. Does not this belief extend to crabs? Or perhaps crabs cannot live out of the sea for long? The most puzzling point for me is that Crabdom seems to lie in the bottom of the Pacific around the west coast covering San Francisco while Lobsterdom (if any) is in that part of the Atlantic covering the New England States. The Chinese proverb â€œPai wen pu yu yi chienâ€ or â€œHearing (about a thing) a hundred times is not better than seeing it onceâ€ proves true. Had I not been in both places I should not have realised the existence of these separate kingdoms. Crabdom and Lobsterdom!

Eating a whole freshly-cooked lobster or crab, though some small forks are usually provided, involves some action with the fingers from time to time, which in turns involves â€œtable manners.â€ This brings to my mind many little problems concerning Chinese eating manners….We Chinese have two definite styles of eating: formal eating and eating for pleasure. At a banquet it is all formality and good manners; at other times we just enjoy ourselves, and then there is no question of etiquette. That is why some of the typically Chinese restaurants in San Francisco have a number of partitioned rooms, unlike the modern fashionable restaurant with many tables neatly arranged all together. Within these partitions, one can enjoy a meal with one’s friends, and eat as unconventionally as one likes without being criticized. Unfortunately this kind of typical Chinese restaurant with partitioned rooms is beginning to disappear even in San Francisco. 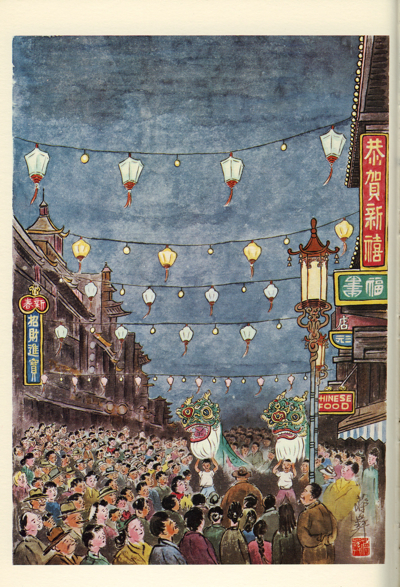 from The Silent Traveler in San Francisco